Legend
the song of

preamble
The vision of Immanence was slowly granted to the Sky by means of contact with the land for millennia. Immanence is not normally achieved by Watchers such as the Sky, but it came in the form of that blindness capable of Immanence— Music, the internal immanence of Being. Requiring first a substantial period of awakening, it germinated initially through a lyrical narration to the would-be Seer, so that the Sky might set the orator’s words at the proper distance to survey its intimate message, in the manner of everyday sight.

The Fall of SKY GOD

and the legend of anxious-buddha

For a brief time, the fog lifted just enough to disclose the sun very low on the horizon and setting behind a rounded earth knoll in the distance. The Sky, though enveloping all of its space and embodying the sum total of perspectives in its sphere of activity, did not, nonetheless, inhabit the landscape. It was aware of every feature on the horizon, but only in passing, and only from the distance of its vantage. Awareness arose as the sky attended to the song of the little raised knoll simply by virtue of its position to receive the setting sun directly at its apex. Once again, the song gained clarity over time in the manner of ....

It presented neither male nor female in gender, for this was a time prior to the differentiation of the sexes, apart from the distant figures and forms of the future. Mythological space spans the past and the future in its singular structure: that of Presence...

The Sky felt the loss of the sun as a hole in its being. Nor did the moon rise with the sun’s radiance polished in its silver serving. Without sun or moon, a darker form of blindness threatened, for the Sky was left without means to bewilder its devotees with jeweled garments, as it had planned for the chosen day. The Sky was not content to transparently disclose the sun and the stars. It desired all eyes to be cast upwards— to present itself as the Beholden One. But the ground had swallowed the sun and withheld its moonlit measure. For Sky, the sun’s absence was felt as a Presence— the presence of Lack in the form of the Moonless Night. Disturbed and agitated, it lingered in mourning, marshalling waters for a quest through the fertile ground to find its burried Sun...

For eons the Sky lingered in the dark above the land— paralyzed in confusion. Thick clouds collected, turbulent storms raged and great waters poured, mourning the sunless vision of a future undeveloped. The Sky’s place as the great heavenly power surveying all from its overarching vantage was lost. Massive waters gave birth to entire seas from raging waters.  In time, the Sky heard first only its own anguish, but slowly, it found itself in the spell of the rising swell of new stirrings...

At first, the ground bore the assault of occupation by over-zealous skies. As the flow continued its affront, the ground, in turn, entered the seeking waters that percolated through it as the Sky blindly sought the only source of light it had recognized as true. In fellowship with the raging waters, the land imparted its own fertile nature to the ever-yearning flow. Through extended contact, the Sky was made to touch, and then fully breath the land’s fecund powers...

Expansiveness and movement eventually returned to the Sky as it slowly gave birth to its own self-luminate glow by virtue of the secret fire granted through contact with fertile land. Eons passed. In time, the soil gave birth to the new Sun, which rose again in the presence of the Sky. The long moonless night had ended. Raging waters withdrew to direct the rambling musings and meanderings of a noisy little brook making its way by jump and fray to the base of a great willow tree. Individual wills burst forth differentiated out of a great Willow with a bearing not of the weeping which sired it, but of a fireworks display of trailing tails— each tale attached to a tail emanating from one trunk, descending one root, deep into the soil.

The differentiated wills gathered in flow downstream with other bubble-emergent waters to form the piled up currents of a great river flowing back to the sea. On its way, the great river split to circumvent a series of massive features that the earth threw up to challenge its course, thereby dividing its great body into myriad branches flowing incessantly toward return. One tiny branch gave itself to the choice of a most circuitous route. Though propelled still with the momentum and grace from the great mountain of its birth, all paths of return to its mother flow were closed to it as it pushed onward to a stone ledge at the edge of a great chasm. There it dropped precipitously, gaining a warrior’s fierceness in its fall. Over the resistant stone ledge the waters continued to pour as curtains of mist rose high to greet the Sky and together veil the depths below with the air of shroud. Underneath, the great earthen vessel pooled isolated waters divorced from the great flow. Away from the Fall, the movement that propelled the flow was forgotten. Stilled waters became lost in the their own isolated power....

it is whispered in the secret hollows of secret regions that once-raging waters have fallen silent, even frozen, yet they retain still their profound powers, powers of seeking from a magical lack

Detail from each panel below prior to hand-embellished accent
with pastel, pencil and protective coating
one-of-a-kind, signed by artist
part of a limited-edition pre-accented print edition 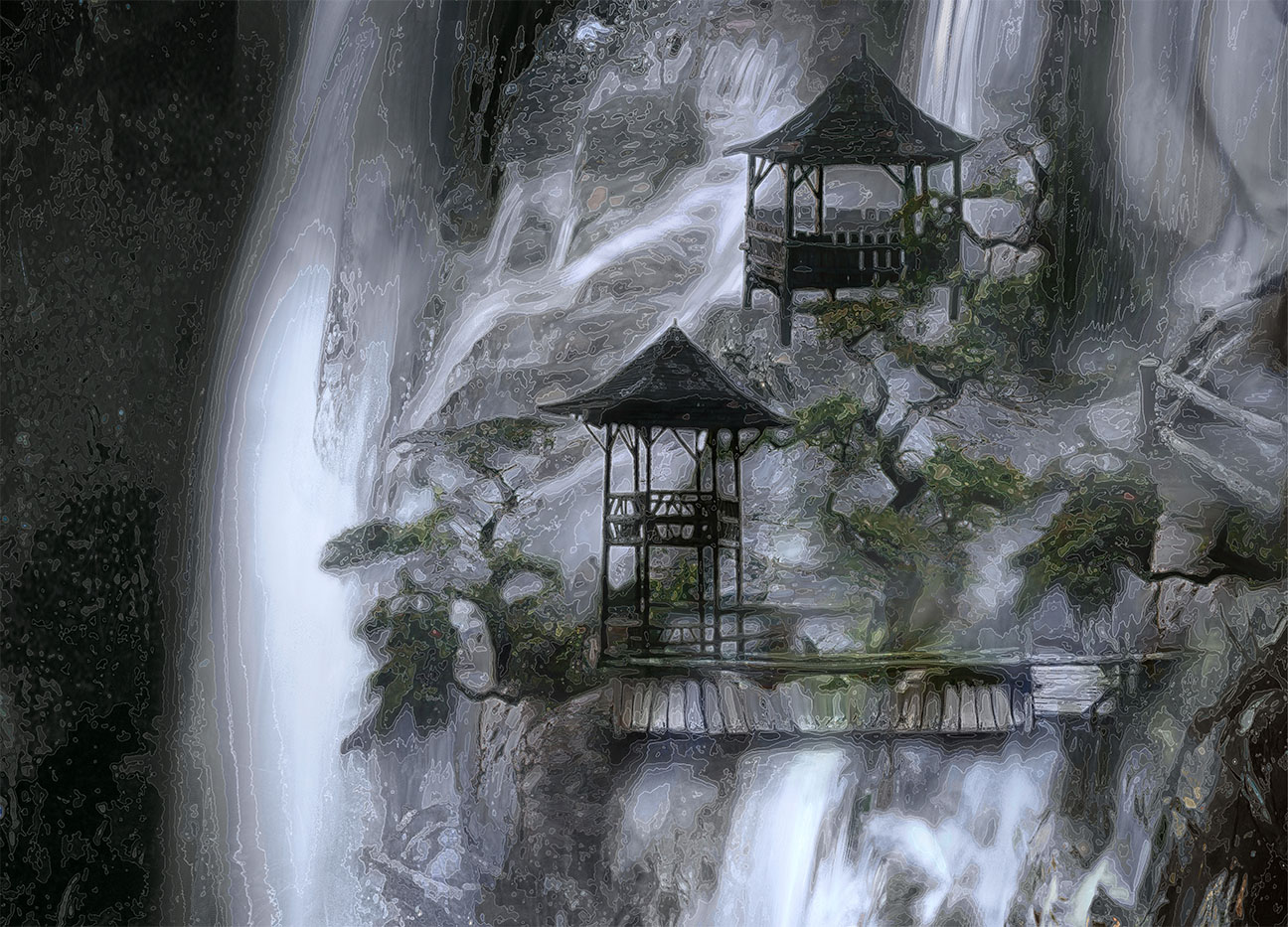 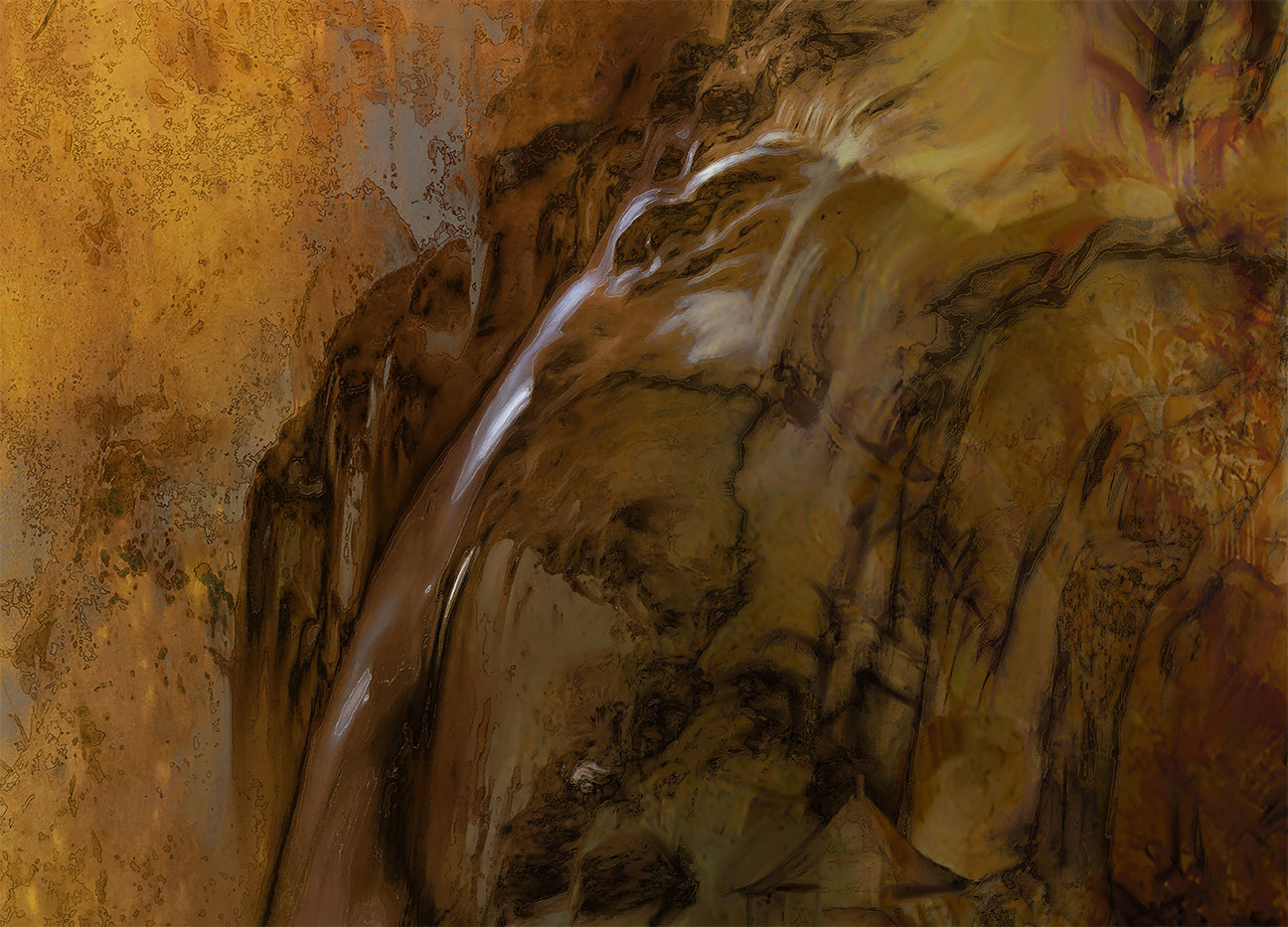